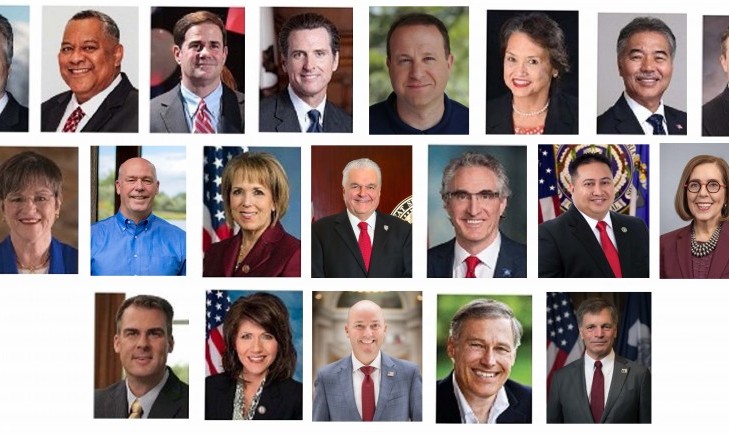 The Western Governors' Association offers a periodic roundup of Western Governors' work in economic development, natural resources, education, health and safety, and a variety of other areas. Here are some of the issues that the Governors have been working on recently:

Alaska Gov. Mike Dunleavy signed legislation to reduce the dependency of rural communities on expensive diesel fuel and heating oil by encouraging the use of microreactors – a factory-built reactor system small enough to be transported by truck that typically generates 1 to 10 megawatts of electricity. “Micro nuclear technology has a potential role to play in creating low cost, reliable power for communities, remote villages, and resource development projects,” he said. “With fuel contracts at $16 per gallon or higher in some Alaska communities, we must pursue all means to reduce reliance on volatile energy sources.”

American Samoa Gov. Palepoi Sialega Mauga issued an executive order that established a Comprehensive Substance Abuse Council to fight drug use through education, enforcement and treatment. “For decades the disease of substance abuse, specifically methamphetamines, has impacted our territory; however, we must remain vigilant and tactful in our approach to finding a solution to its devastation," said Gov. Mauga.

Arizona Gov. Doug Ducey recently returned from a five-day visit to Israel where he worked to strengthen economic ties (bilateral trade between Arizona and Israel stood at over $660 million in 2021, according to the Arizona Commerce Authority), and learn about the country’s water technology and management strategies – especially water desalination. “Innovations like these are part of the solution to secure our water future. In January’s state of the state, we said desalination made Israel the world’s superpower – and it’s clear to see here,” Ducey wrote on Twitter.

California Gov. Gavin Newsom allocated an additional $150 million in funding for Homekey, a statewide effort to sustain and rapidly expand housing for persons experiencing homelessness or at risk of homelessness. Since its inception in 2020, the program has successfully constructed 10,000 homeless housing units. “Homekey’s success over the past two years has proven that homelessness is a solvable issue,” Gov. Newsom said.

Colorado Gov. Jared Polis authorized the Colorado Department of Agriculture to help Colorado’s agricultural industry mitigate the effects of the ongoing mega-drought and improve the efficiency of agricultural water distribution systems by awarding 21 competitive grants totaling more than $1.68 million to agricultural businesses, tribal organizations, water management entities, and watershed improvement projects across the state. “Water is life for Colorado,” he said. “I look forward to seeing the impact of these grants for years to come.”

Guam Gov. Lou Guerrero is growing the conservation workforce through job creation initiatives that include employment opportunities at the Guam Department of Agriculture under the Civilian Volunteer Conservation Officer Reserve Program. “Thriving ecosystems support successful communities and businesses, so the work of our conservation officers and civilian volunteers is critically important to Guam’s recovery,” said Gov. Guerrero.

Hawaii Gov. Doug Ige signed legislation to establish a green jobs youth corps that will provide temporary work and training opportunities in the fields of natural resource management, agriculture or other sustainability‑related professions for young adults.

Idaho Gov. Brad Little recently signed the FY23 Idaho state budget that included a $300 million increase in funding for K-12 education, a 12.5% increase over FY22 which amounts to the single largest increase in state history. The Idaho Legislature also approved Governor Little’s plan for an additional $47 million for literacy – his top priority in education.

Kansas Gov. Laura Kelly awarded 11 Kansas Tourism Attraction Development Grants to aid economic development throughout the state, including renovations for the Kansas State Fair Expo Center, a new disc golf course, and trail improvements. "By continuing to develop vibrant travel destinations across Kansas, we are opening the door to more revenue and new economic growth in communities of all sizes," said Gov. Kelly.

Montana Gov. Greg Gianforte announced a $20 million investment to expand the state’s health information exchange, a platform that allows doctors, nurses, pharmacists, and other health care providers to access and share a patient’s vital medical information electronically. “This critical investment in Montana’s health care IT ecosystem will support ongoing efforts to improve the overall experience for patients and clinicians across the state, while saving lives, creating efficiencies, and saving taxpayer dollars,” he said.

Nevada Gov. Steve Sisolak launched Phase 1 of the “High Speed NV” initiative, which will invest $200 million through a combination of state and federal funds to close the digital divide to unserved and underserved rural and urban areas, with a goal of creating universal, scalable and affordable internet access for all Nevadans by 2029. The initiative will also provide workforce training opportunities to a new generation of telecommunications workers and outreach efforts to create a statewide digital equity plan that includes digital literacy.

North Mariana Islands Gov. Ralph Torres announced that the U.S. Department of the Interior Land and Water Conservation Fund State and Local Assistance Program apportioned $2 million for the Commonwealth of the Northern Mariana Islands for outdoor recreation projects benefiting the community. “I am grateful for this support from the U.S. Department of the Interior and for their partnership and collaboration, as this funding will greatly assist the CNMI in carrying out various conservation efforts through community and outdoor recreation projects that will benefit our islands,” said Gov. Torres.

Oregon Gov. Kate Brown signed the bipartisan Private Forest Accord Package into law and established protections for salmon and other sensitive species on more than 10 million acres of forest land. “The package of bills I signed today is built on the understanding that, through science-based forest management, we can strike the right balance between protecting the health of our forests and creating jobs and economic growth in our rural communities at the same time,” Gov. Brown said.

South Dakota Gov. Kristi Noem signed an executive order that will provide relief to farmers who are struggling to stay on schedule with planting crops. The order will temporarily allow farming equipment to move along state highways overnight. "Planting, fertilizing and agriculture chemical application has been delayed and now requires round-the-clock operation in order to lessen the impending impact of farmers not getting in the field in adequate time for planting and crop emergence,” the order read.

Utah Gov. Spencer Cox signed a renewed Shared Stewardship agreement with the U.S. Department of Agriculture Secretary Tom Vilsack to help fight wildfires. “Wildfire danger remains extremely high this year and by working together with our partners, we can substantially reduce the risks to lives and property as well as keep our forests healthy,” Gov. Cox said.

Wyoming Gov. Mark Gordon is addressing health care workforce shortages by joining the Next Generation of the Healthcare Workforce Learning Collaborative — a multi-state collaboration to address workforce challenges. “Wyoming is not unique in facing healthcare workforce shortages, an issue that has only been exacerbated by the pandemic,” Gov. Gordon said. “Long-term solutions will require a coordinated effort that will benefit from this collaborative approach.”

Best of the West: Increasing equitable access to parks and outdoor recreation; a data-efficient mega lab; and a ground-breaking space mission

Best of the West: Improving post-fire restoration; a historic sale of carbon credits; developing an electric vehicle for the Baja-1000; and a western Thomas Crown Affair