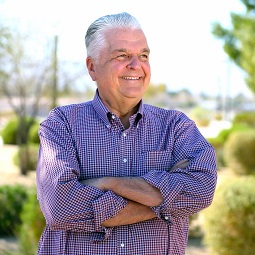 Career: Sisolak was elected as the 30th Governor of Nevada in 2018. Prior to public office, he was an entrepreneur and partner with the American Distributing Company and served on the Nevada Board of Regents from 1999 to 2008. In 2008, he won election to the Clark County Commission and was reelected in 2012 and 2016.

Did you know? Nevada is one of only two states to significantly expand its borders after admission to the Union.