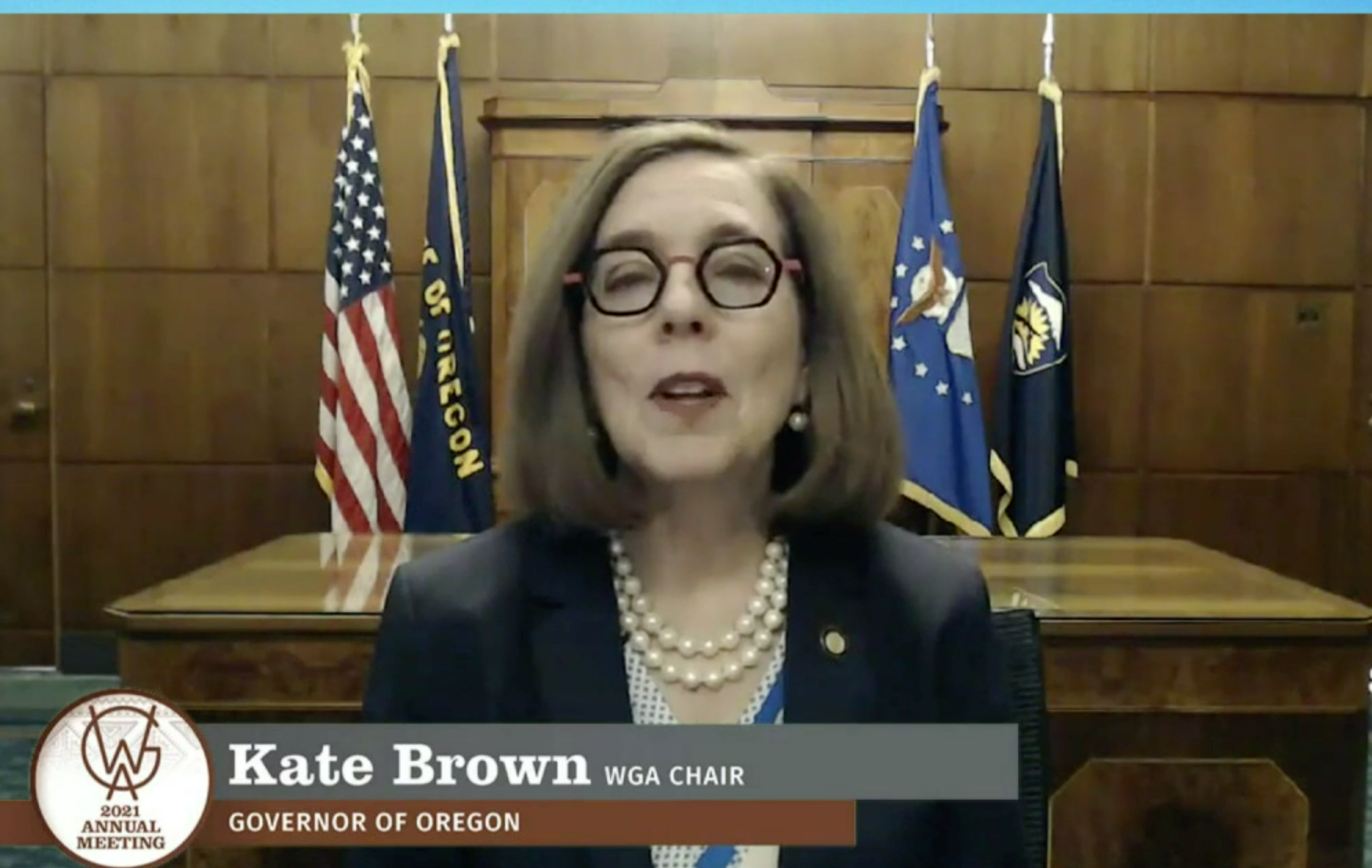 The meeting concluded with the election of Gov. Little as WGA Chair and Gov. Polis as Vice Chair. Gov. Little announced that his Chair Initiative will be “Working Lands, Working Communities,” an examination of the relationships between western communities, states and federal land resource management entities. And the Governor invited attendees to save the date for the WGA Winter Meeting, planned as an "in-person" event on Dec. 9-10 in Coronado, Calif.

Here’s a look at highlights from all sessions:

Gov. Brown: “The 'Electric Vehicles Roadmap Initiative' recognizes that we all agree that the expansion of electric vehicle infrastructure is an economic imperative for our states. This mutual understanding promotes collaboration across the aisle and throughout the West to elevate and energize an issue that states are already working on both individually and collaboratively.” 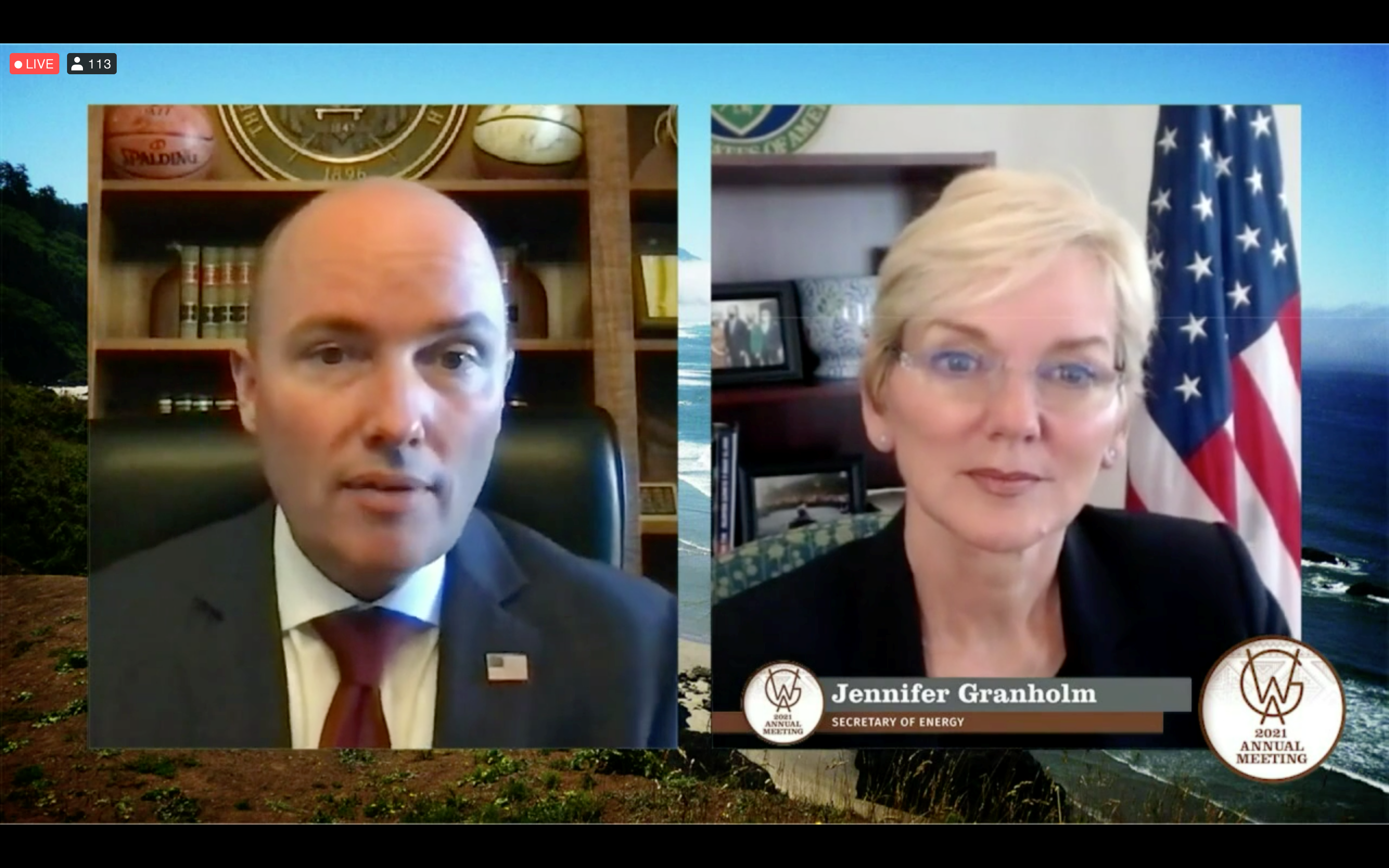 Secretary Granholm: “You have been leading the charge as governors toward this clean energy transition. I’ve been watching as WGA governors have really moved the entire region forward … You’re demonstrating what is possible can be done together, in a bipartisan way.”

Gov. Cox: “The process of permitting for transmissions lines on public lands, including to expand electric vehicle charging, is incredibly expensive and cumbersome. I’m hoping you can help us reconcile those goals and interests and how we can come to harmony in making those things happen.”

Gov. Burgum: “The top line for North Dakota is the words innovation versus regulation… (Innovation) requires R&D dollars and with that, we think we can achieve the goals or even exceed goals that the nation has set. We think, regulation will raise the cost and lessen the chance of us achieving those goals.”

Gov. Ige: “Transforming our energy was part of transforming our economy because we were the most fossil fuel-dependent state in the country with more than 95% of our energy coming from imported fossil fuel, which meant every year we shipped $4 or $5 billion out of state and created jobs elsewhere. We definitely want the opportunity to bring it back here.”

Gov. Little: “We’re ramping up the first domestic cobalt mine in the United States right now, and it’s having some NEPA issues but not too many. We have a lot of strategic minerals that would be available in Idaho. So, anything the Department of Energy can do to nudge your partners in either the Department of Agriculture or the Department of Interior to get that done would be very helpful.” 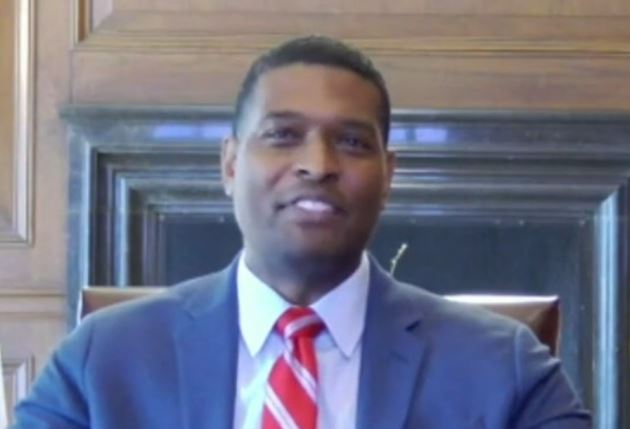 ENVIRONMENTAL POLICY AND THE WEST: Administrator of the Environmental Protection Agency Michael Regan: The Administrator will discuss the importance of cooperation between the federal government and states on environmental policy. (Watch his remarks)

Administrator Regan: “I think we can all agree, whether its methane leaking from oil and gas wells, or dangerous pollutants reaching into waterways, we all have a stake in the health of our environment. We also all have a stake in our economy and the well-being of our communities. I believe these values will make for a successful partnership.”

Secretary Haaland: “Quite frankly, wildfire has not always received the attention and resources it deserves. But the President’s budget reflects increases that demonstrate how seriously we take this issue, including providing a $100 million increase for fuels management and burned area rehabilitation work.”

Gov. Little: “Some of the critical minerals and compounds that we need for battery technology, for the semi-conductor industry, for whatever it is, we stand willing and ready to work with you to facilitate that so that American dependence upon foreign sources continues to go down.” 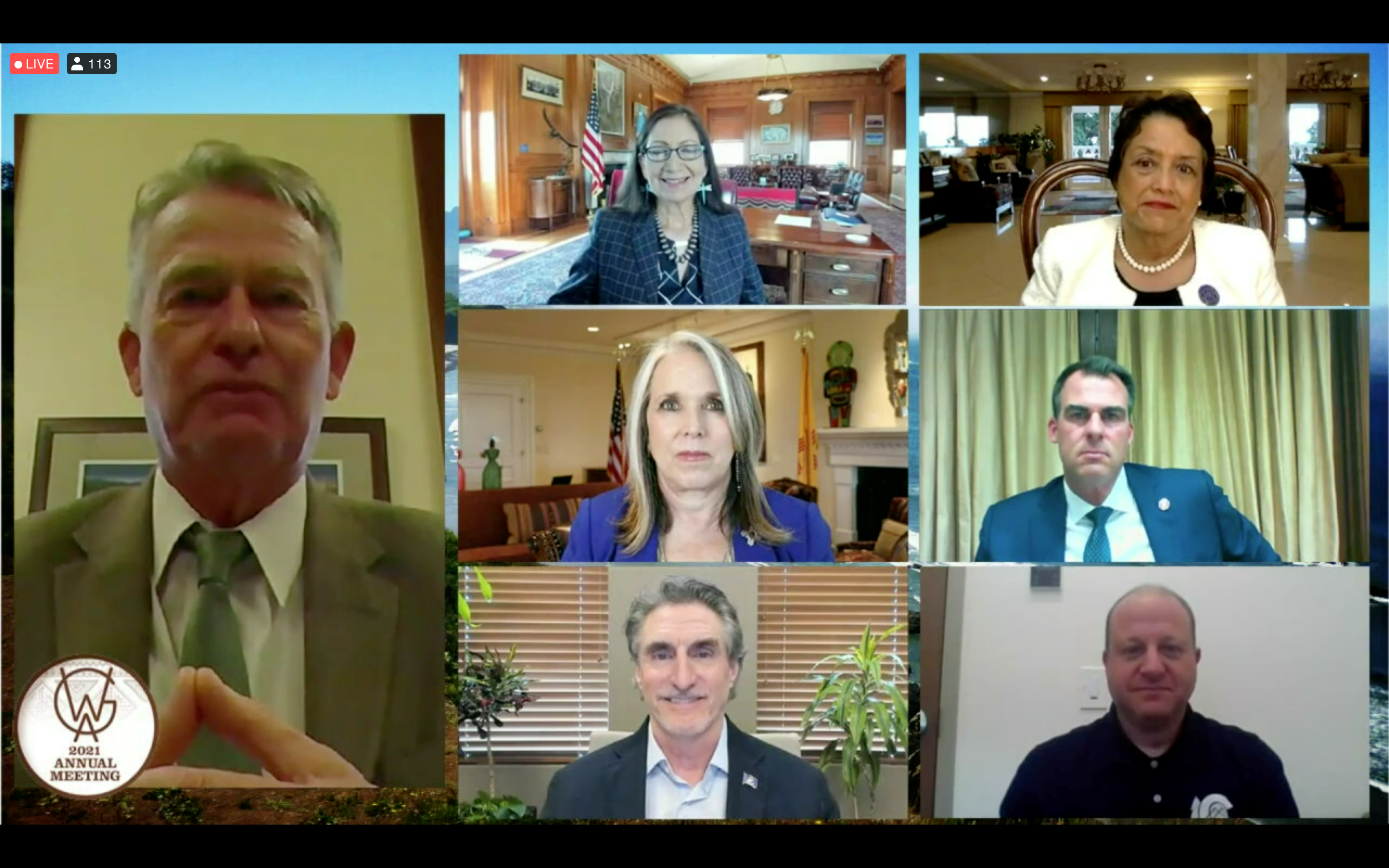 Gov. Burgum: “We share the aspirations (of the 30X30 Initiative) … so we look forward to having those consultations and make sure that it is a partnership and not a federal top-down that could have a lot of unintended consequences.”

Gov. Guerrero: “We are being invaded by the rhino beetle. Our coconut trees are dying, and we have some invasive plants that are also killing off some of our good plants. I would like to be a part of the (Invasive Species Advisory Council) as I could contribute and learn about what we can do to protect our resources.”

Gov. Polis: “Different Governors in different states have different perspectives, but I think where we probably would agree is we would like the ability to work with you quicker and more flexibly around the wildlife management issues that affect our states.”

Sec. Vilsack: “It’s one thing to talk about bridges and roads and so forth, all of which is very important, but broadband is also infrastructure and frankly, our forests are green infrastructure, and we need to invest in them as well.”

Gov. Burgum: “The USDA plays an important role with our research universities. We want to continue to collaborate with you related to carbon sink opportunities for farmers and ranchers.”

Gov. Ige: “During this pandemic, we saw how fragile the supply chain is and we’ve been working to expand local production.”

Gov. Little: “Whether it’s the state lands departments, the forest service, whether it’s industrial timberland owners … I believe we can use the shared stewardship model to maximize access and minimize the costs to any one user."

REBUILDING ECONOMIES AFTER COVID-19: Secretary of Commerce Gina Raimondo: The conversation between the Secretary and WGA Chair Kate Brown (OR) and Governor Lou Guerrero (GU) examined economic prosperity in western states, the impact of COVID on state and local economies, and the importance of broadband availability to economic vitality throughout the West. (Watch the session) 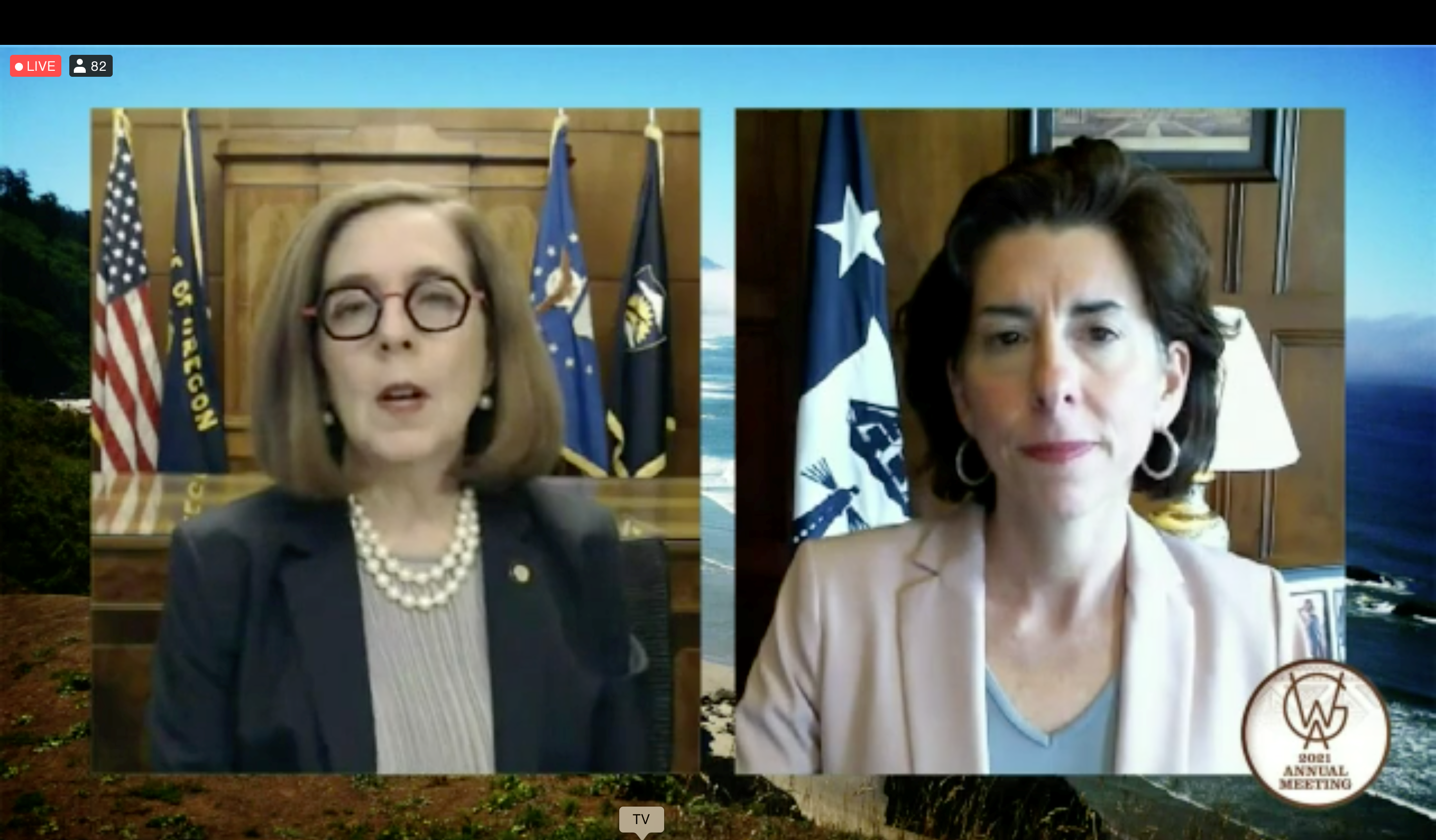 Gov. Brown: “In Oregon we are really focused on our recovery efforts of centering the voices of our historically underserved communities. Our black, our communities of color, our tribal, our indigenous communities, and our rural communities.”

Gov. Guerrero: “One of the things that we’re doing here is apprenticeship work with the community colleges and bringing in the private sector to hire these apprentices right after graduation.”

Gov: Little: “Over the next year some of the issues we’ll tackle include identifying barriers to better management… tools and innovations for rural communities to adapt to changing economic, environmental and technological conditions… as well as ways to expand markets for western working lands.”