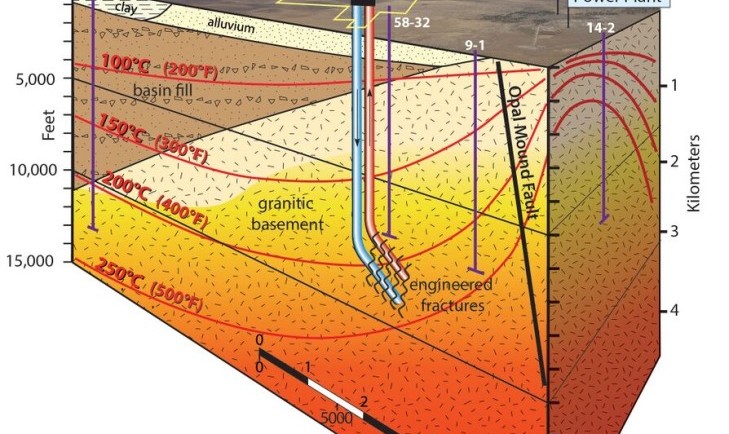 While the potential for geothermal energy use in the West is vast and its benefits wide-ranging, accessing the resource can be difficult and expensive – especially when a community is not located near a robust geothermal reservoir like those found in Hawaii and Idaho.

To address this issue, The U.S. Department of Energy sponsored an underground field laboratory in southwestern Utah, known as Utah FORGE (Frontier Observatory for Research in Geothermal Energy), to advance the uptake of geothermal resources around the world using Enhanced Geothermal Systems technologies. 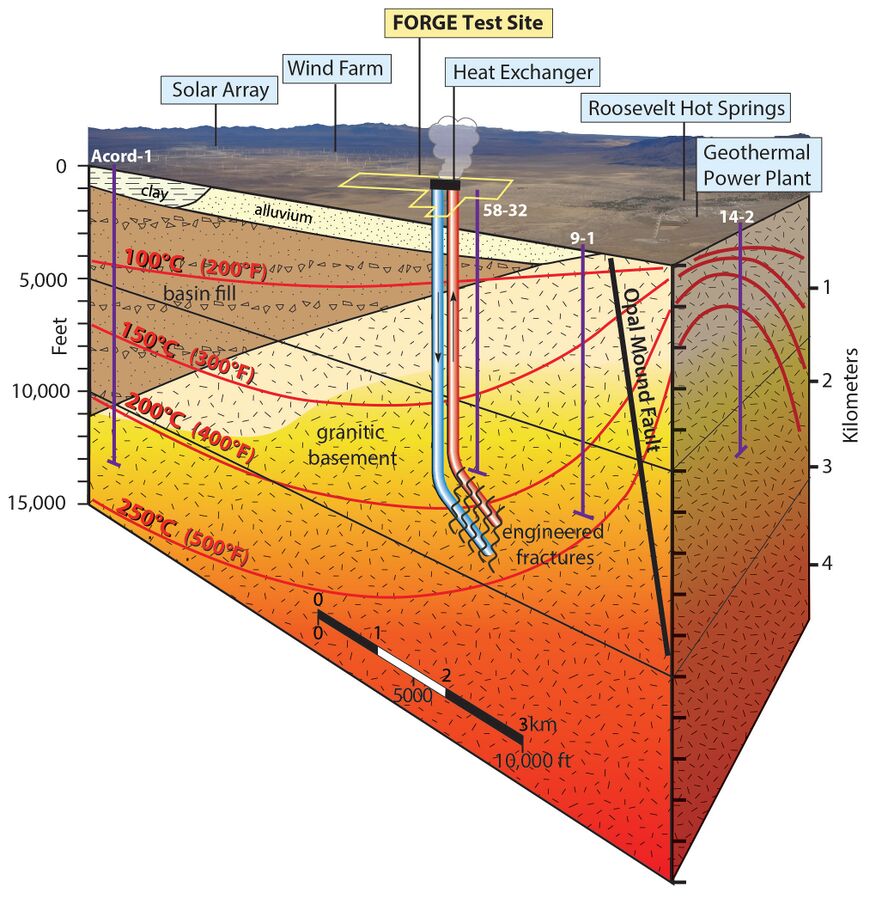 While there are no commercial-grade EGS reservoirs currently in operation, according to the U.S. Department of Energy, “EGS offers the chance to extend use of geothermal resources to larger areas of the western U.S., as well as into new geographic areas of the entire U.S. More than 100 GWe of economically viable capacity may be available in the continental United States, representing a 40-fold increase over present geothermal power generating capacity. This potential is about 10% of the overall U.S. electric capacity today, and represents a domestic energy source that is clean, reliable, and proven.” 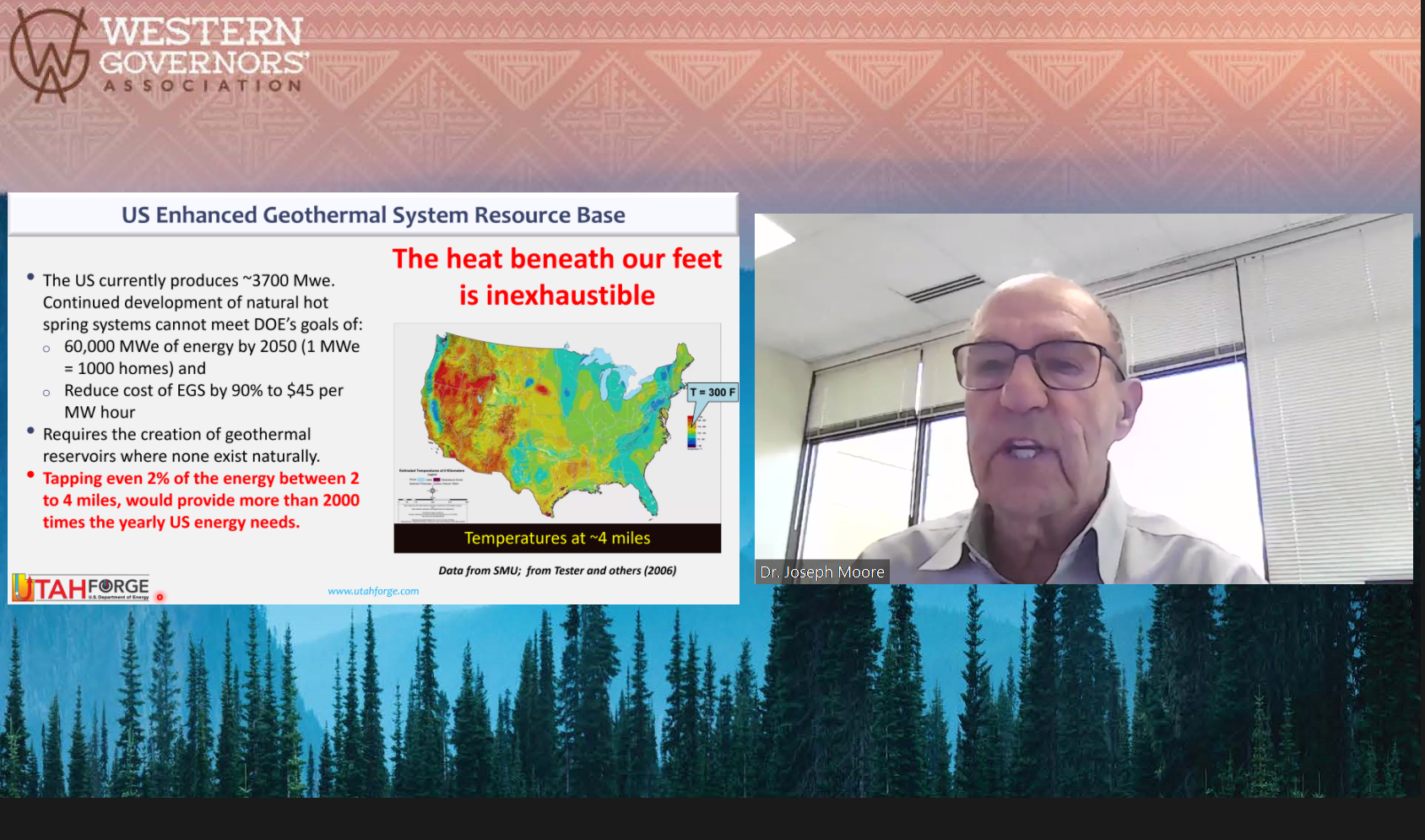 On Dec. 19, WGA hosted a webinar with Dr. Joseph Moore, the principal investigator at Utah FORGE, to delve into the tools and technology necessary to make this exciting practice a reality.

“Geothermal potential is inexhaustible… but you can't meet U.S objectives [within the Enhanced Geothermal shot] to produce 60 megawatts using conventional hot spring systems,” he said. They're just not big enough. We need to be able to drill everywhere across the country... and if you want an electrical plant anywhere, you could use EGS.”

It can also be used for agricultural purposes and piping geothermally heated water into greenhouses to keep them warm and to maintain humidity.

The main barrier to more widespread deployment of Enhanced Geothermal Systems, Dr. Moore said, is the lack of tools capable of withstanding the sustained heat involved with geothermal energy.

“New tools are absolutely required to build an EGS system,” he said. “Our project at Utah FORGE is not to generate electricity, it's to de-risk the these tools and to create the reservoir… to develop the road map so that developers and others in any country can take the road map and build the system.”

Of course, developing an Enhanced Geothermal System is only half of the problem. EGS require hydraulic fracturing to increase the permeability of the rock and either enhance or create a geothermal reservoir. That type of disturbance always raises a certain level of environmental concern.

Jaina Moan, the Director of External Affairs with the Nature Conservancy, said that while there are concerns with EGS, they are not all that different from any other type of energy project and that these concerns can be assuaged with advance planning.

“Smart from the start regional energy planning is where you identify and prioritize lower impact areas where renewable energy generation, storage, and transmission can be deployed while minimizing the impact to those natural lands, cultural resources, recreation, and other conservation values,” she said. “We have done this by doing a lot of mapping exercises where you overlay layers of sage Grouse habitat, or wildlife habitat, or endangered species layers with plants for transmission and renewable energy and geothermal energy. One area that we're also looking at, at The Nature Conservancy is how to develop renewable energy on already disturbed or previously disturbed lands.”

Learn more by watching the webinar below. You can also learn about the potential for repurposing orphaned or abandoned oil and gas wells for geothermal energy production in a new episode of WGA’s ‘Out West’ podcast.

Read highlights, see photos from the 2022 Winter Meeting in Phoenix

Best of the West: Regional snowpack stacks up; the future of geothermal drilling; historic river restoration; Breckenridge legend inducted into the U.S. Ski and Snowboard Hall of Fame