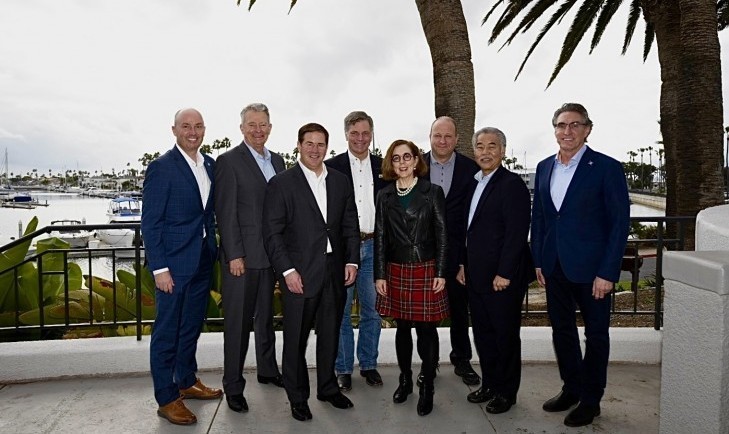 Despite the challenges of a global pandemic, catastrophic natural disasters and civil discord, Western Governors had a banner year in 2021, working on a bipartisan basis to advance the welfare of the West.  With great appreciation for the hard work and dedication of Western Governors, we are pleased to present WGA’s annual “Top Ten List” for 2021:

WGA reconstituted its Task Force on Collaborative Conservation as a forum for Governors to work collaboratively with the Biden Administration on conservation-related issues.  Most Western Governors have made appointments to the Task Force, which is working on a potential Memorandum of Understanding with federal resource agencies.

WGA launched the Western Prosperity Roundtable with a virtual inaugural event on May 19-20.  The Roundtable is a new platform to help realize the Western Governors’ vision for expanded prosperity throughout the West.  Governors Brad Little, Doug Burgum, and Kate Brown kicked off the Roundtable’s inaugural forum with introductory comments, and panels of experts and thought leaders addressed such critical and timely issues as Education and Training for a Rapidly Changing Economy and Disaster Resilience and Recovery.  Governor Kevin Stitt will host the 2022 Roundtable forum this spring in Oklahoma.

The Governors worked diligently and cooperatively to produce a raft of bipartisan policy resolutions on issues critical to the West.  These resolutions articulate substantive and detailed policy positions and guide the ongoing policy work of the Association.  In 2021, the Governors adopted the following resolutions: Disaster Preparedness and Response, Transportation Infrastructure in the Western United States, Water Resource Management in the West, Cleaning Up Abandoned Hardrock Mines in the West, Water Quality in the West, Physical and Behavioral Health Care in Western States, Cybersecurity, Foreign Visitor Preclearance, Compensatory Mitigation, Energy in the West, Air Quality Protection and Management, and Workforce Development in the Western United States.

Upon his installation as Chair of WGA, Governor Brad Little launched his Working Lands, Working Communities initiative, which, among other things, is examining the interdependent relationships between western communities and land resource managers.  Following a kickoff webinar hosted by Governor Little in July, initiative workshops were hosted by Governors Spencer Cox in Salt Lake City, Jared Polis in Denver, and Mike Dunleavy in Ketchikan.  The final workshop – which will be hosted by Governor Little on February 23-24 in Boise – will be followed by a webinar series, production of podcast episodes, and publication of a final report and policy recommendations next summer.

At the WGA Annual Meeting, the Western Governors’ Foundation launched the Western Governors’ Leadership Institute, a program designed to reward the exercise of leadership across the West and encourage its future development.  The Foundation will select one young adult from each western state and territory to attend an all-expense-paid leadership forum held in conjunction with the WGA Annual Meeting.  The inaugural leadership forum will be held on July 25, 2022, in Coeur d’Alene, Idaho.

WGA’s ever popular sponsor luncheon series resumed after a two-year COVID hiatus with events hosted by Colorado Governor Jared Polis in October and North Dakota Governor Doug Burgum in November.  The next such luncheon will be hosted by WGA Chair Brad Little on February 22 in Boise.

WGA hosted an interactive series of virtual town halls featuring bipartisan pairings of Western Governors.  During these livestreamed events, the Governors discussed their priorities and engaged in open dialogue with members of WGA’s sponsor community.  Town halls were held with Governors:  Kate Brown of Oregon and Doug Burgum of North Dakota; Brad Little of Idaho and Jared Polis of Colorado; Michelle Lujan Grisham of New Mexico and Mark Gordon of Wyoming; and Spencer Cox of Utah and Greg Gianforte of Montana.

In July, WGA completed its work on the initiative of immediate past Chair Kate Brown to create an electric vehicles roadmap for the West.  The effort produced multiple significant deliverables, including:  a multistate agreement on EV charging infrastructure in the West; an initiative report on EV planning considerations and infrastructure needs; and an updated transportation policy resolution including targeted recommendations regarding EV programs and planning.