The Western Governors' Association keeps you updated on the latest news in the West. Here are the top stories for the week starting March 28, 2022. (Photos courtesy of Sibanye Stillwater and the Rapid City Journal)

As the Biden Administration recently invoked the Defense Production Act to address critical mineral shortages, secure a clean energy future and build energy independence, western states are ahead of the curve. Many states already extract rare earth minerals for technology, like the batteries being developed at the $1.4 billion factory LG Energy Solutions plans to build in Arizona.

As outlined in the WGA policy resolutions, Energy in the West and National Minerals, securing domestic critical mineral production is a top priority for Western Governors.

Utah’s Spor Mountain is the only facility in the U.S. producing beryllium — an essential element for the aerospace industry. NASA’s James Webb Space Telescope, the most powerful telescope ever launched into space, used beryllium from the mine to build mirrors. In Montana, the active Stillwater and East Boulder Mines (pictured) are the only significant source of palladium in the U.S., which is critical for catalytic converters.

As electric vehicle sales accelerate, lithium is in high demand for batteries. Recently, the Biden Administration awarded $35 million to MP Materials, a Nevada-based rare minerals company, to mine materials in areas including California’s Salton Sea. The area contains copious quantities of lithium from naturally occurring hot brines, which could generate 10 times the current U.S. demand. California Gov. Gavin Newsom addressed the plans at his State of the State address and said, “clean energy is this generation’s greatest economic opportunity.” In Oregon, a massive volcano that erupted 16.4 million years ago could make the state home to a “lithium rush.”  The McDermitt Caldera, located on the Oregon and Nevada border, could be the largest known lithium deposit in the U.S.

Several other western states have mining projects in the works, including Idaho. The "Development of Idaho-Sourced Rare Earth Elements Drilling and Extraction” project will focus on an “environmentally friendly” separation and processing of critical minerals. American Rare Earths recently began the “Halleck Creek Rare Earth Project” in Wyoming, samples from which show high-grade rare-earth element mineralization.

De-stressing the Grid: California startup Harvest Thermal is piloting its “Harvest Pod” — a dual-purpose pump that combines water and space heating into a single unit. The device connects to a standard heat-pump water heater and air handler. Hot water travels through the air handler’s coils, warming air throughout the home. In addition to reducing emissions by using electricity, the unit uses software that balances the power grid. When a significant amount of energy is available on the grid, the device overheats and stores water to reduce demand on the grid when it’s strained.

Top of the Economic Podium: For the second straight year, the Milken Institute ranked Provo-Orem, Utah, as having the best economic performance among large cities. One of the factors that placed the city at the top of the list is its attractiveness to the tech giants, including Oracle, Adobe, Vivint Smart Home, Qualtrics and Amazon. Logan, Utah, also ranked at the top for small cities, which considered factors like job and wage growth and high-tech medical manufacturing industries. Other western cities that made the lists are in Arizona, Colorado, Washington, California, Idaho, South Dakota, Oregon and Texas.

Championship Robots: High school students from North Dakota are going to the FIRST 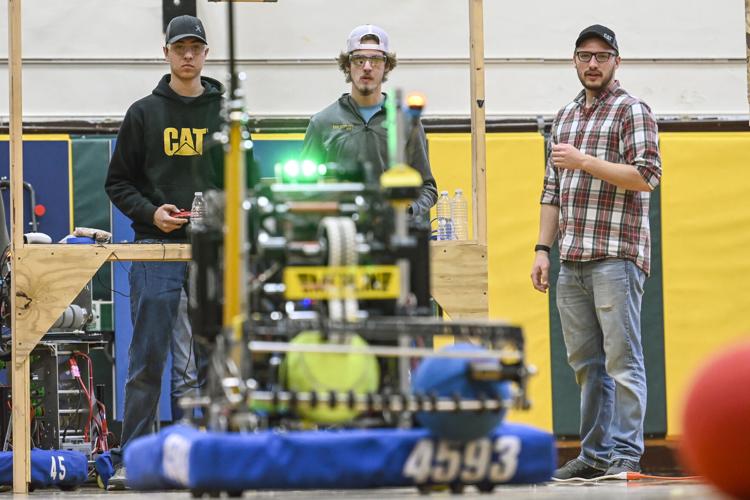 Robotics World Championship for the fourth year in a row. To qualify for the event, teams created robots that can pick up oversized tennis balls, throw them into different level containers and climb ascending monkey bars. After 133 different designs, the team finalized plans for their robot named Merlin. A team from Montana is also going to the World Championship after winning the state robotics championship. "I remember we were all jumping up and down and screaming,” said Adalyn Maxwell, a member of the Mechanical Maniacs robotics team. It's really exciting to have an accomplishment, not just for our team, but for our school as well.”

Best of the West: Celebrating wildlife conservation; a new non-profit hospital system; harnessing the power of volcanoes; and acid-spewing ants