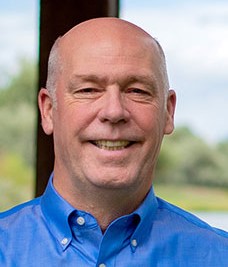 Early Years: Gianforte was born in San Diego, Calif., in 1961, but fell in love with Montana after visiting the state for a school trip.

Education: Gianforte attended Upper Merion High School in King of Prussia, Pennsylvania, before going on to study at Stevens Institute of Technology, earning a bachelor’s degree in electrical engineering and a master’s in computer science.

Career: Gianforte spent 34 years in the private sector, beginning his career at AT&T Bell Laboratories in the early 1980s. He co-founded Brightwork Development Inc., where he served as  president for eight years. In 1994, Gianforte sold Brightwork to McAfee Associates, staying on as North American vice president. He left shortly thereafter to form another company of his own – RightNow Technologies – headquartered in Bozeman, Montana. In 2012, eight years after going public, Gianforte sold RightNow to Oracle for over $1.8 billion. Gianforte’s political career began in 2017 when he was elected to represent Montana in the U.S. House of Representatives, where he served on the House Committee on Energy and Commerce.

Did you know? Montana is the fourth largest state after Alaska, Texas, and California