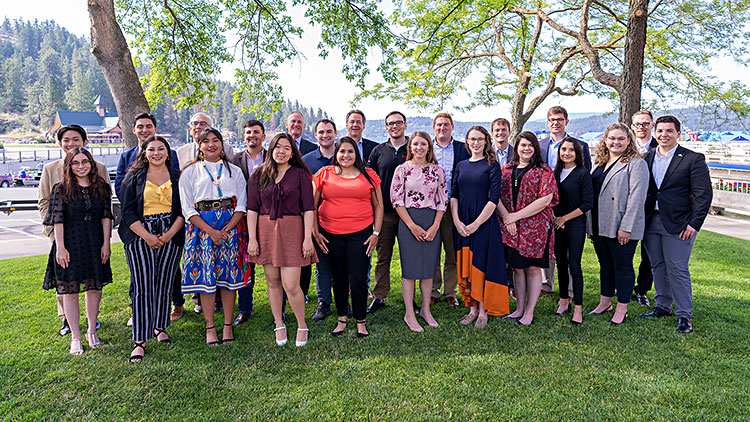 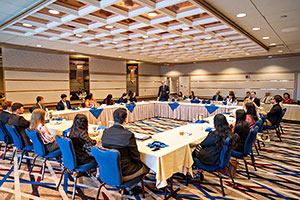 Designed to promote and encourage the effective exercise of leadership by young adults across the West, the Institute convened 21 state delegates at the Annual Meeting of the Western Governors’ Association where they participated in the Institute’s Leadership Development Forum and attended panel discussions between regional experts, eight Western Governors, and four Cabinet Secretaries.

During the Leadership Development Forum, the delegates had the opportunity to discuss the nuances of leadership with 12 former and current Governors, as well as Barry Dunn, the President of the South Dakota State University, Duane Highley, the CEO of Tri-state Generation and Transmission Association Inc., and several Gubernatorial staffers.

Former South Dakota Gov. Dennis Daugaard, Chair of the Western Governors’ Foundation, spoke about the importance of seizing opportunities when they present themselves and never losing sight of personal values. 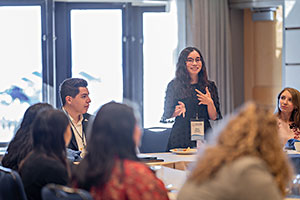 Colorado Gov. Jared Polis, the newly elected Chair of the Western Governors’ Association, spoke about the difficulties of managing crises and handling issues like floods, wildfire, and COVID. He also spoke about what it means to be a leader and a member of the LGBTQ community and advised how to use diversity as an asset.

Arizona Gov. Doug Ducey shared the lessons he learned as a Governor, as well as a business executive, including his experiences campaigning, serving as Governor, and the importance of strong decision-making as a leader.

SDSU President Barry Dunn spoke to delegates about the importance for leaders to understand and accept past in order to drive future change. 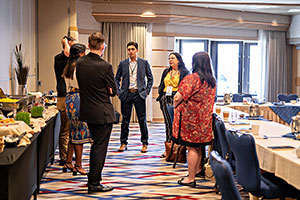 Jace Beehler, the Chief of Staff for North Dakota Gov. Doug Burgum, and Gordon Larsen, the Senior Advisor for Federal Affairs with Utah Gov. Spencer Cox, shared their experiences working behind the scenes in state leadership.

At the end of WGA’s Annual Meeting, a handful of the delegates were brought up on stage to discuss their experiences with the attending Western Governors.

Learn more about the program and meet all of the state delegates below. 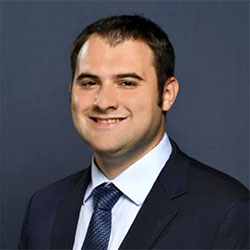 Gustaf Vanderdonck is a rising third year law student at Arizona State University, Sandra Day O’Connor College of Law. A highly decorated student, Gustaf will be working this summer with the Nevada Attorney General’s Office in the Solicitor General Division. In the fall, Gustaf will be working with the Arizona Solicitor General’s Office, Criminal Division. In his free time, Gustaf enjoys traveling and hiking. 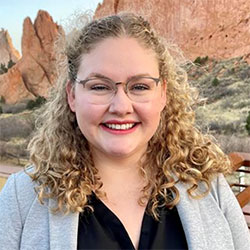 Samantha Mooney is a Certified Workforce Development Professional, passionate about leveraging public resources to create high-quality career pathways leading to a strong labor market and economic mobility. With a B.S. in Justice Studies from Arizona State University, and an alumna of the Next Generation Service Corps, this summer she will complete her Master of Science in Organizational Leadership with a concentration in Strategic Communication from the University of Colorado Boulder. 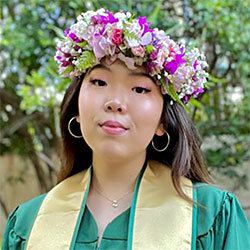 Tammy Kim was born and raised on O’ahu, Hawai’i. Upon graduating from the University of Hawai’i at Mānoa, she accepted a position in the Hawai’i State Legislature and served as the committee clerk for the House of Representatives Majority Leader’s Office. Since the end of the legislative session, she has accepted her new and current position as office manager. 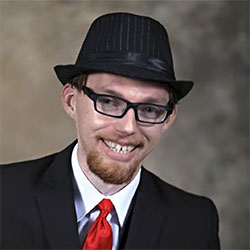 Skyler Bollar grew up in Twin Falls Idaho. Having recently graduated from the College of Southern Idaho with a degree in Renewable Energy Systems Technology, he has accepted a position working at the Twin Falls Pest Abatement district as a technician. In his free time, he enjoys scuba diving, rock climbing, reading, and spending time with friends. 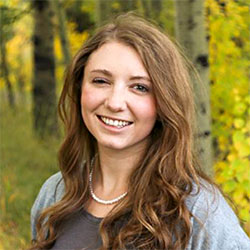 Caroline is a Montana native having grown up near Choteau MT. She is currently studying Agriculture Business at Montana State University and is interested in agriculture, natural resources, law, and policy. During the summer, Caroline works on sheep and cattle ranches while completing part-time law related internships. In her free time, she enjoys cooking, music, reading, or simply taking in Montana’s magnificence. 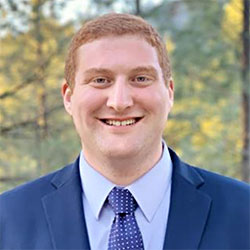 Jonathan Karlen is a Boon and Crocket Club Wildlife Conservation Fellow at the University of Montana. Having earned his B.S. in Wildlife Biology from the University of Montana, followed closely by his Master’s in Public Administration with a public policy concentration, he has held multiple leadership positions within the Congressional Affairs Office of the U.S. Forest Service, and the Missoula City Council. In his free time, Jonathan coaches youth ski racing, explores Montana public lands, and teaches watershed science to Missoula students. 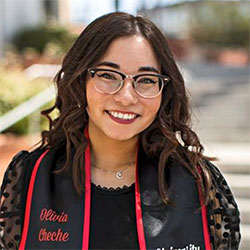 Olivia Cheche was born and raised in Las Vegas. After graduating from the University of Nevada Las Vegas with a B.A. in Political Science, and a minor in Public Policy, she now works as a researcher for The Lincy Institute and Brookings Mountain West, a regional think tank that corresponds with Washington D.C. In her free time, she enjoys traveling and spending time with her two dogs. 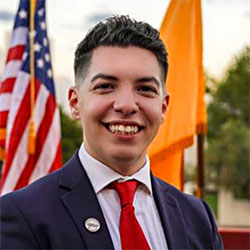 David Saavedra was born and raised in Grants, New Mexico. He later moved to Albuquerque where he excelled at the University of New Mexico, earning a BA in Public Communications with an emphasis in Public Relations and Business Administration, and a professional Master of Public Administration. David currently works for the New Mexico Legislature as a Fiscal Analyst to the nationally recognized and award-winning Legislative Finance Committee, leading the state’s judiciary budget. 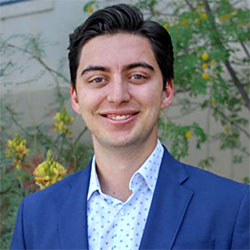 Brandon Larranaga moved to Las Vegas, New Mexico in 2008 where he has lived ever since. As a rising senior at New Mexico State University, Brandon is double majoring in journalism and media with an emphasis in strategic communications and agricultural communications. He has been declared National Hispanic Scholar by his College Board and is passionate about hunting, fishing, wildlife, and natural resource conservation in the West. In his free time he enjoys traveling, watching movies, or catching up on sports. 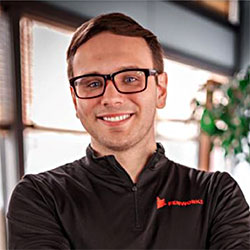 Kaleb Dschaak grew up in Dickenson North Dakota. He graduated from the University of North Dakota with a degree in political science and marketing before founding Fenworks, an education company focused on providing emerging technology activities during and after school. In his free time, Kaleb is an avid gamer and enjoys being civically engaged in his community. 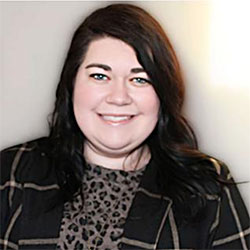 Kaitlin Walker grew up in North Dakota and attended Minot State University where she earned a B.S.Ed. in Math Education and Business Education. She continued her education at Western Governors’ University where she earned her M.Ed. in Learning and Technology. Kaitlin currently teaches math at Bottineau High School. When she is not in the classroom, she enjoys spending time with friends and family, or doing anything that involves being a little creative. 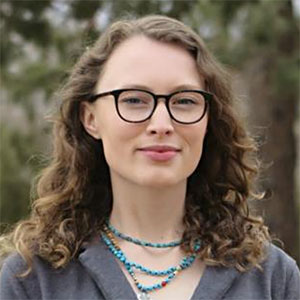 Aspen Lenning grew up in the West. Born in Nebraska, raised in North Dakota, and now living in Oklahoma, she is working on her master’s degree in natural resource and ecology management at Oklahoma State University. In her free time, Aspen loves yoga, painting, raising goats, and supporting 4H. 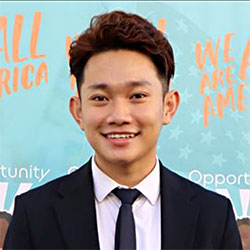 Kien Truong is the Chief of Staff for Oregon State Senator Kayse Jama. In that position, he focuses on state housing, labor, business, and immigration policy. Outside of his 9 to 5 job, Kien is active in his community, serving as Executive Director for the Asian and Pacific Islander Community Coalition of Oregon, Co-Chair of the Multnomah County Community Involvement Committee, and Secretary for the Portland Police Bureau Asian and Pacific Islander Advisory Council. In his free time, Kien enjoys reading, cooking Vietnamese foods, and spending time with family. 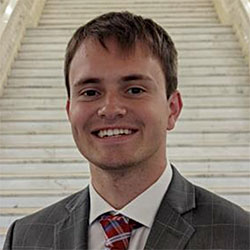 Brian Pontius currently serves as Policy Advisor for the South Dakota Department of Agriculture and Natural Resources (DANR’s). He is passionate about supporting agricultural producers and in his current role, he assists with DANR’s legislative efforts, communication, and grants. Brian holds a master’s degree in public policy from Temple University. In his free time, Brian enjoys spending time in South Dakota’s beautiful state parks. 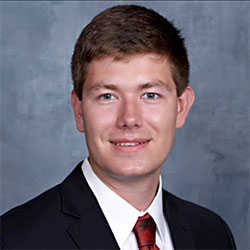 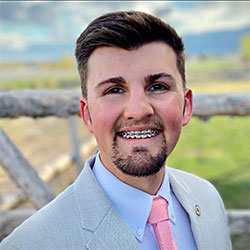 Ryan Bake was born on a small farm and at a young age, became involved in the National FFA Organization. His experience on the farm and with FFA solidified his desire to pursue a career in agriculture. Currently attending Utah State University to study Agricultural Economics, he serves on the College of Agriculture Student Council and has recently completed an internship at the Utah legislature. 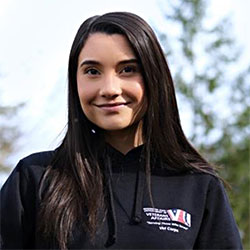 Gabriella Smith is a Vet Corps navigator at the Washington State Arts Commission. With her Bachelor’s in Music Business, she works with military oriented populations in the Olympia community through art and creative healing initiatives. Gabriella is passionate about strengthening communities through music and art and is excited to continue her work at Vet Corps. 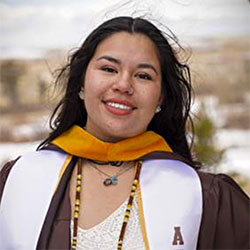 Christie Wildcat is Northern Arapaho and Cherokee on her maternal side and is Pawnee and Navajo on her paternal side. Christie currently resides in Laramie where she is studying anthropology and political science at the University of Wyoming as a second-year graduate student. She is passionate about recovering lost artifacts and seeks to one day become curator of the American Indian National Museum. 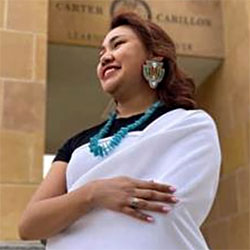 Mahala Sutherland is a member of the Navajo tribe from Winslow, Arizona. She currently attends Southern Utah University where she is majoring in Sociology and minoring in Psychology. Mahala is currently the director for the Diversity, Equity, and Inclusion Council at Southern Utah University and hopes to continue advocating for underrepresented students in higher education. In her free time, she enjoys Jingle dress dancing – Powwow – and volunteering at the Center of Diversity and Inclusion. 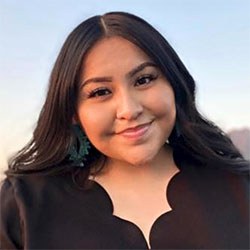 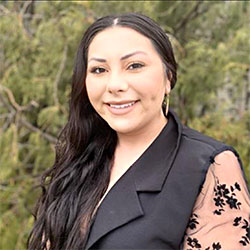 Kara Azure is a proud member of the Turtle Mountain Band of Chippewa Indians. Born and raised in Belcourt, North Dakota, she earned her Bachelor of Arts in Ogimaawiwiin, Tribal Leadership, and Business Management. Kara currently serves as a marketing intern for the Turtle Mountain Community College Bookstore. In her free time, she loves traveling, exploring new places, trying new foods, and meeting new people.

Please direct any questions or inquiries about the Western Governors’ Leadership Institute to Anna Thielen at athielen@westgov.org or 720.897.4535

To learn more about partnership opportunities, and to financially support the Western Governors’ Leadership Institute, please contact Sarah Olsen at solsen@westgov.org or 720.897.4540. 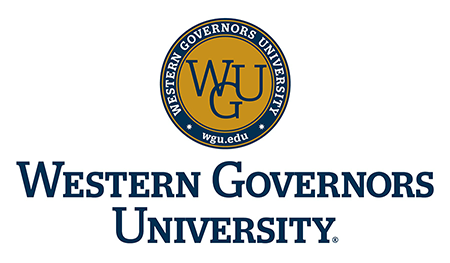 The Western Governors’ Association represents the Governors of the 22 westernmost states and territories. The Association is an instrument for bipartisan policy development, information exchange and collective action on issues of critical importance to the Western United States. The Western Governors’ Foundation is the philanthropic arm of the Association. Guided by a bipartisan board of directors, the Foundation pursues charitable causes to promote the well-being of Western residents.